Most of the Cairngorm Munros accessible from Deeside involve long track approaches along wide open glens. Braemar, conveniently located on the elbow of the A93 Perth to Aberdeen road acts the gateway village to a vast swathe of Scottish upland. After a busy few weeks, Imogen and I were up for some remoteness and the forecast was for heavy downpours in the West Highlands. The only solution was a good bit of Munro bagging out on the dry, eastern hulks of Ben Avon and Beinn a’Bhuird.

These two summits tucked away on the far Eastern extremity of the Cairngorm massif form together an impressive expanse of granite plateau above 1000 m. The prospect of heading out on multi-day expeditions from Braemar always conjures an exciting, exploratory feeling; a rarity for outings in the UK mountains. In these parts, unless you’re up for epic 12-hour + days with long track based trudges sandwiching the high ground experience in the middle of the day, you’re forced to overnight somewhere out in the wilds.

We arrived at a damp and windy Linn of Dee carpark just as dusk was setting in on Friday. It was the first time we had hit Deeside outside of the Scottish winter season so we were surprised at the number of vehicles in the car park (which is usually deserted when we turn up late on a Friday). Some were inhabited, but most were locked up for the weekend, their owners no doubt out frequenting the bothies and heather moorland of the inner Cairngorms.

The starting point for our route was the Linn of Quoich, so after an early breakfast in the car to escape midges at Linn of Dee, we trundled eastwards a few kilometres along the north side of the Dee to the small carpark at the road-end. At this point, the track leading along Glen Quoich departs. Once booted and saddled, we were soon getting into a warming rhythm heading upstream along the attractive, mostly forested glen. After about 8 km, the Quoich Water swings east and then north around the bulk of high ground forming Beinn a’Bhuird. We continued upstream until the fine cropped heathery hillside of Carn Eag Dhubh gives access onto the Ben Avon plateau at its southernmost end. After a largely dry morning with sunny intervals, the promised afternoon showers began to build as we gained height. Upon reaching the 1000 m contour near Carn Eas (1089 m) we were shrouded in drizzle and mist, with the brisk westerly just adding that full-on Cairngorm experience. There was something a little more benign about the whole experience compared with most of our winter outings in the area, despite us wearing almost similar quantities of clothing. Luckily, the showers and cloud were short-lived and by the time we had completed the long trudge over the open plateau to the corrie rim of Ben Avon’s north face, blue sky featured once more. Indeed, the granite-t0r featuring the true summit of Ben Avon; Leabaidh an Daimh Bhuidhe (1171 m) looked very fine indeed against the clear air. Unfortunately, the very highest point would have involved some rather delicate scrambling along the summit rocks. Not a great idea given the 60 mph gusts that were blasting through the many crevices in the tor. We did just manage 5 minutes of shelter on the eastern side for a quick snack looking out over Royal Aberdeenshire and southeastwards towards Lochnagar.

After retracing our steps for a kilometre or so, we descended gravelly slopes into ‘The Sneck’, the high, 980 m watershed between the Quoich and Avon waters. From this point, there are great views of the high, glacially scoured corrie of Garbh Choire on the east face of Beinn a’Bhuird; a feature that must contain many fine and relatively unfrequented winter snow gullies. A short push up the other side, leads to the equally vast, twin plateau of Beinn a’Bhuird. The first top, Cnap a’Chleirich, 1174 m, is little more than a pile of boulders and staging point for yet more vast, featureless upland. The benefit of walking on these plateau in mostly clear weather is that ground can be covered relatively rapidly. Our next point of interest, was the true summit and ‘North Top’ of Beinn a’Bhuird, 1197 m. The rather uncelebratory cairn is located around 150 m back from the corrie rim of Coire nan Clach; one of a series of perfectly formed scoops hanging high on the mountainside above the broad breach of the Water of Quoich.

We reached the summit of our second munro of the day around 17:30 and at this key point were faced with a key decision – where to head to strike camp? Our original plan had been to descend via a broad stream gully to the Dubh Lochan, nestled high on the east flank of Beinn a’Bhuird, however the weather was showing no signs of improving that evening and the prospect of a draughty, drizzly session with the camping stove was not particularly appealing. Instead of this, we opted to continue southwards along and off the plateau in the direction of a long hill track that leads off the high ground back down towards the Quoich Water, around 8 km away. This lead us at long last to some rather sheltered, sweet and mature pine forest sometime just after 20:00. After a session of pumping and filtering down at the Quoich, we were re-stocked with several litres of water; sufficient to replenish ourselves with pasta and hot chocolates after our wonderful 31 km outing. Despite the pitch being on a slight slope, we slept very well indeed. The unrivalled comfort of the Therm-a-Rest NeoAir mattresses are just what you need after a long day on the hill! Who needs a hotel bed?

Given that we had made it back down into Glen Quoich on Saturday evening, Sunday morning simply presented us with a leisurely stroll back down the track leading to the Linn of Quoich. The blustery, moist weather still prevailed but at glen level, it was reasonably mild. July after all! Our gradual downhill track trudge passed with ease and the pleasant sign of young Scots Pine, Mountain Ash and Birch trees rounded of a perfect weekend in the wilderness. 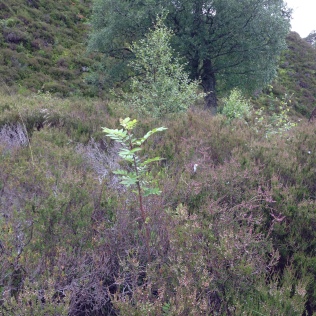 Glen Quoich falls within the Mar Lodge Estate, managed by the National Trust for Scotland. With a progressive policy on reducing deer numbers and replanting native Caledonian forest. The landscape is beginning to take on a more primeval feel, with restored natural processes. The results are clear, not a red deer in sight all weekend, no ticks found crawling on our trousers or tent and a good variety of forest birds inhabiting the rapidly reforesting Glen Quoich (beautiful Bullfinches seen fluttering around the trees on the final slope back down to the carpark). Now all that is needed is the restoration of the natural top predators to release full trophic diversity. Upon return from this trip, I note with interest via the Mar Lodge Estate website that the first successful breeding attempt of a Hen Harrier in decades has been confirmed over the weekend. Great news for raptors, I hope this is just the start of further rewilding in the Cairngorms.

Postscript – I’m just adding the final touches to this blog at 21:00 on Tuesday 19th July and just two days after the trip I’m in the back yard with the laptop, shorts and shirt, 28 C! It feels several seasons away from the cool, blustery weather in the north over the weekend. Even the Dachstein mitts had to come out at times!

Kenfig Dunes, Pools and Rest Bay swimming.
South Wales mountain biking; day 1 Mynydd Eglwysilan horseshoe & Rhymney Valley Ridgeway. Day 2; Blade trail from Glyncorrwg Afan trail centre.
#BikesOnTrains update. Only (!) 3.5 hrs after supposedly departing Lancaster, the Orange beast waits on platform 6 at Crewe for Transport for Wales train to Cwmbran. Last minute platform alteration & mad dash over bridge it makes it to another stacked out with luggage, 2 bike storage area. The seatbelt just about reaches round the frame. All braced for whatever lies ahead for it between Cwmbran & Cardiff Central.
#BikesOnTrains update; with the tiny area for 2 bikes on this Transpennine Express train full of people and luggage, the Orange beast has no choice but to prop up in the doorway area.
Last few pics of a great trip to Roybridge, finishing off with another Geal-Charn Munro #119 today in the Drumochter hills before heading home.
Day 3 of a productive Munro bagging trip, 1st day with clear summits on 2 out of 3 of today’s hills. Big track trudge from A86 Loch Laggan into remote country of Creag Pitridh, Geal Charn & Benin a’Chlachair. Munro’s #116, #117, #118 :-). With @sam.harrison.7
Follow DARREN AXE IML FRGS on WordPress.com
%d bloggers like this: